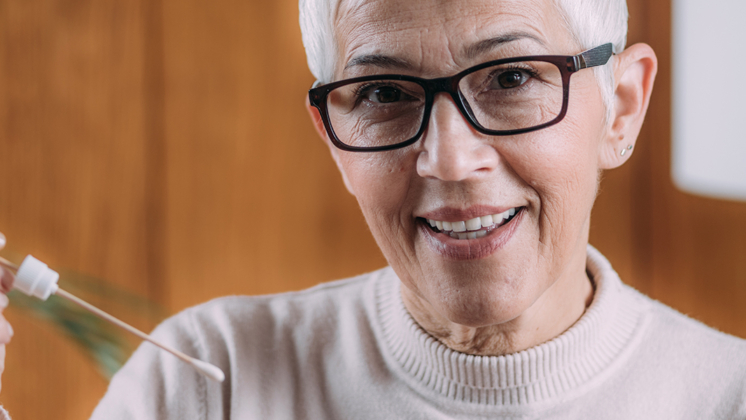 The 86-year-old woman in rural Utah doesn’t usually answer solicitations from strangers, she said, but the young couple who knocked on her front door seemed so nice. Before long, she had handed over her Medicare and Social Security numbers — and allowed them to swab her cheek to collect her DNA.

She is among scores of older Americans who have been targeted in a scam that uses DNA tests to defraud Medicare or steal personal information. Fraudsters find their victims across the country through cold calls, door knocking, email, Facebook ads and Craigslist.

The woman in Utah said she didn’t know the purpose of the DNA test she submitted to this month — “I’m too old to remember” — but the visit troubled her for several nights, she said.

“I’d lie awake thinking about it, saying, ‘You fool, you shouldn’t have done that.’” (She spoke on the condition of anonymity for fear of being targeted by other scams.)

In interviews with Kaiser Health News, seniors around the country reported feeling betrayed, exposed and confused.

“I’d lie awake thinking about it, saying, ‘You fool, you shouldn’t have done that.’”
One Utah woman who fell for the scam

Capitalizing on the growing popularity of genetic testing — and fears of terminal illness — scammers are persuading seniors to take two types of genetic screenings that are covered by Medicare Part B, according to experts familiar with the schemes. The tests aim to detect their risk for cancer or medication side effects.

The scammers bill Medicare for the tests. The patients, who might never receive any results, typically pay nothing. But they risk compromising personal information and family medical history. And taxpayers foot the bill for tests that may be unnecessary or inappropriate.

Scammers can really cash in: Medicare pays an average of $6,000 to $9,000 for these tests, and sometimes as much as $25,000, according to the Office of Inspector General at the Department of Health and Human Services.

DNA test scams appear to be ramping up: Complaints to the inspector general fraud hotline have poured in at rates as high as 50 per week, according to Sheila Davis, an OIG spokeswoman. That’s compared with one or two complaints a week at the same time last year, she said.

The inspector general issued a fraud alert in June, urging seniors to refuse unsolicited requests for their Medicare numbers and take DNA tests only with the approval of a doctor they know and trust. By Medicare rules, DNA tests must be medically necessary and approved by a physician who is treating the patient.

In cases that have gone to court, scammers were accused of breaking those rules by paying kickbacks to doctors who agreed to order DNA tests for patients without ever treating them. The front-line recruiters who solicit the tests might work directly for a lab, or as independent contractors who divide revenue with a laboratory in exchange for bringing in extra business.

Some solicitors try to scare seniors into cooperating, said Shimon Richmond, an assistant inspector general for investigations. They warn seniors that they could be vulnerable to heart attacks, stroke, cancer or even suicide if they do not take the DNA tests.

Richmond said the two tests involved in the scams are: CGx, which tests for genetic predisposition to cancer, and PGx, a pharmacogenomic test for genetic mutations that affect how the body handles certain medications. They’re part of a new frontier of preventive genetic health.

In New Jersey, three people were sent to federal prison in May for a scheme that used a purported nonprofit called Good Samaritans of America to persuade hundreds of seniors to take DNA tests. The co-conspirators raked in $100,000 in commissions from labs that ran the tests, according to the government.

“This is a gold-rush area for folks. It’s leading to a big response by the government,” said Assistant U.S. Attorney Bernard Cooney, a prosecutor in the case.

“This is a gold-rush area for folks. It’s leading to a big response by the government.”
Bernard Cooney
Assistant U.S. Attorney

This month, a Florida doctor was charged in federal court for his role in an alleged fraud scheme to order DNA tests for patients in Oklahoma, Arizona, Tennessee and Mississippi. Patients were recruited through Facebook ads offering $100 gift cards, according to court records. The doctor allegedly confessed that he was being paid $5,000 per month to approve these tests, even though he never spoke to any of the patients involved.

Some labs accused of billing Medicare for unnecessary genetic tests — including Millennium Health and Companion DX Reference Lab — agreed to repay the government but declared bankruptcy before doing so, leaving taxpayers on the hook.

In Weslaco, Texas, Will Dickey, a 71-year-old retired police detective, submitted to a DNA test at a health fair in February.

“I have a bunch of cancer in my family,” he recalled thinking, so “it’d help if I had an idea of what genes I had in me.” Three weeks later, he saw the same salesperson rounding up business at his RV park, where his wife and several neighbors got their cheeks swabbed. Dickey, who spent 10 years working with DNA tests in a police crime lab, said he was surprised at the cost: A lab in Mississippi charged Medicare $10,410 for his tests.

He didn’t get results until he requested them by phone. The report, which listed results as “uncertain,” was “a bunch of gobbledygook that makes no sense to anybody who’s not in the medical field,” he said. He reported the case to authorities as possible fraud.

As in Dickey’s case, scammers often gain access to places that seniors trust by persuading gatekeepers to let them make presentations. Bev Beatty allowed a genetic testing company to run a booth at a senior health fair she organized in Oak Forest, Ill., last year. At least 10 seniors took the tests. Afterward, she was irate to discover they had been roped into a scam. Test-takers told her they never received their DNA results, even though Medicare paid thousands of dollars.

“If somebody’s going to be fraudulent and bill Medicare, it kind of riles me up,” she said. “I would like to see them hanged.”

In Paducah, Ky., Donald McNeill, a 72-year-old Vietnam War veteran, was persuaded at an event at his senior center in December to submit a cheek swab for a DNA cancer screening. The company never sent results, he said. But it billed $32,212.86 to his Medicare Supplement insurance plan. He’s worried his personal information will be misused.

“I’ve lost my identity to these people,” he said. “They got my DNA and they got my information through this scam. I’m extremely upset.”

Others may face consequences for merely engaging with scammers. In Idaho, a woman in her late 60s said she responded to an online ad for free genetic testing and got a callback 20 seconds later. She received a cheek swab kit in the mail but, suspecting a scam, never sent it in. Now, she said, she finds her phone suddenly plagued by robocalls.

In California, 1 in 4 cases reported to the state’s Senior Medicare Patrol this year for potential fraud have been related to genetic tests, according to Sandy Morales, statewide volunteer coordinator.

Sherry Swan of Roseville, Calif., is one of many who have filed complaints. She said she was home one Sunday afternoon in early June when a man named Caleb knocked on her door, and said, “I’m here to do your DNA testing.”

“What are you talking about?” she recalled asking him. She said he failed to produce an ID when asked. “It was just a scam from the minute he opened his mouth.”

In California, 1 in 4 cases reported to the state’s Senior Medicare Patrol this year for potential fraud have been related to genetic tests.

Swan said she spent five minutes arguing with the man, then called the police when he left.

“I’m aggressive. I work with homeless in the county,” said Swan, who is 64. But she said she worried about the more passive and trusting neighbors in her senior living complex. She later discovered that many had been persuaded to take the tests and divulge their family medical histories.

A man named Freddy, who answered a number on a flyer that Caleb had left at Swan’s door, said he supervised Caleb as part of a team from Whole Home Solutions. He said the operation was aboveboard because they enrolled only eligible Medicare beneficiaries, and that a teledoctor would consult with the person’s treating physician before the tests were sent in. The tests were handled by Pathway Labs in Colorado Springs, Colo.

Pathway Labs CEO Rene Perez confirmed his lab handled about 20 tests sent in by Whole Home Solutions. But he said he cut ties with the company on July 6 on the advice of his attorneys after receiving complaints about how seniors were being solicited for the DNA tests. The lab worked with the outfit for about 45 days, Perez said.

Such experiences make him “reluctant to take on new business” from similar entities sending in DNA tests, Perez said.

“We strongly advocate and believe in the benefits of genetic preventative health,” he said. “But the problem that we see right now is that it’s really picking up momentum on the national level. Unfortunately, when that happens, you get a variety of different sorts of groups that essentially may see dollar signs.”

To seniors curious about these DNA tests, Richmond of the inspector general’s office has this advice: “If anyone calls you, or sends you an unsolicited request for your Medicare number or to convince you or scare you into taking a genetic test, either hang up the phone or say no.”

Seniors interested in the tests should call their primary care provider, he said: “Don’t give into the manipulation or the scare tactics to get this health care test from someone you don’t know.”

If you suspect Medicare fraud, contact the OIG Hotline online or at 1-800-HHS-TIPS.

Kaiser Health News is a nonprofit news service covering health issues. It is an editorially independent program of the Kaiser Family Foundation, which is not affiliated with Kaiser Permanente.