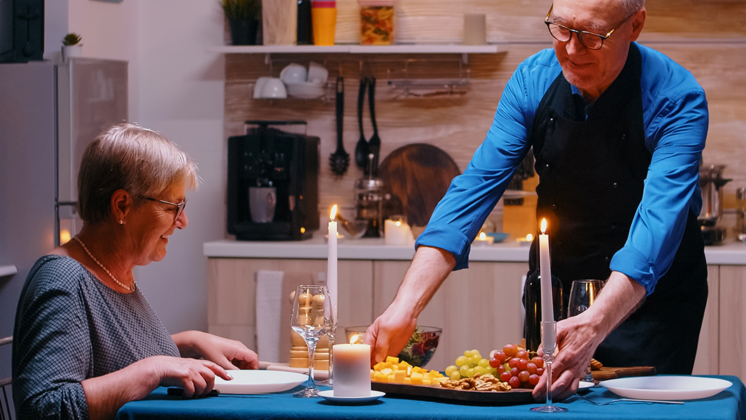 When Nancy K. Schlossberg was ready to retire as professor of counseling psychology at the University of Maryland, she assumed it would be a piece of cake. After all, her theories of how best to help adults navigate personal and professional shifts were the foundation for an entire textbook on the subject, “Counseling Adults in Transition.”

It was anything but easy.

Her husband, Stephen, a labor lawyer who served as general counsel to the United Auto Workers and an undersecretary at the U.S. Dept. of Labor, had retired a few years earlier. Once Nancy joined him at home, he constantly was asking her: “Where are you going and when will you be back?”

“Every time Steve would ask me that, I would sing in an operatic voice, ‘If you keep asking me where I am going, I am going to kill you,'” says Nancy.

Many couples envision their retirement as a shared experience. But more often than not, it doesn’t work that way.

One partner may fall victim to a late-career layoff or become physically unable to keep up with the demands of a full-time job. Others may simply get sick of the grind sooner. Or the couple may realize that one of them needs to work longer to afford the retirement life they’d planned.

Regardless of the reason, only one in 10 couples wind up retiring at the same time, according to a recent AARP report. More commonly, the husband retires first.

Moreover, the vast majority of couples aren’t on the same page when it comes to their post-work life. A survey from Fidelity found that half of couples disagree on their retirement age — and a third don’t see eye-to-eye about their expected lifestyle in retirement.

Not quite feeling ready to have a newly retired partner in your physical and emotional space 24/7? Here’s how to smooth the transition.

Allow for a bumpy phase

Not crazy about your husbands’ new habit of staying up until 2am? Didn’t realize that your wife spent so much time playing tennis? Your spouse’s post-work life might look different than you imagined — and most likely, your dynamic will be different, too.

Only one in ten couples wind up retiring at the same time.

“Acknowledge that this is a transition,” says Anthony Chambers, Chief Academic Officer of The Family Institute and Director of the Center for Applied Psychological and Family Studies at Northwestern University, “Like all transitions it will be bumpy but that they can also figure it out as they create a new baseline of normalcy.”

Instead of stewing, take a step back and give your spouse some breathing room. “It’s important to consider that he is negotiating quite a change,” says Nora Hall, author of Survive Your Husband’s Retirement. Seeing the dynamic in that light may help put it in perspective, she says. “For most couples this transition feels huge, but compared to what you’ve likely been through together it’s probably relatively minor,” says Hall.

When a newly-retired husband winds up at loose ends, all too often, women find themselves in the role of emotional caretaker, says Roberta Taylor, a psychotherapist and co-author of The Couples Retirement Puzzle. She says she often speaks with women in their 60s and 70s who confide that they are frustrated by the dynamics in the relationship, but then they say, “I don’t want him to feel bad or offended.”

Shifting the conversation from feelings to goals can help bridge that divide, says Taylor. Good friends, and a good therapist may be the better outlet for deep dives into feelings.

“If I could have invented a patience pill I would have been a very rich woman.”
Nancy Schlossberg

Chambers suggests accentuating the upside by working through the questions: “How can we take advantage of this next phase of our lives?” and, “What do we want to do that we’ve never done before because we did not have the time?”

If your newly-retired spouse wants more together time than you do, have a frank discussion where you lay out your needs. You can even draw a Venn diagram to determine how much “my time/your time” you each need in a given day or week, to make you both feel great about the “shared time” you settle on.

There is no magical time table for how long it may take to untangle these emotional kinks. For some couples it may be a few months, or maybe a few years.

“Over time, if you have a lot of support and are pretty optimistic, things will fall in place. But it can be a struggle for a while,”  says Schlossberg, who after her academic career went on to author books including Retire Smart, Retire Happy and Too Young to Be Old. “I realized a while ago that if I could have invented a patience pill I would have been a very rich woman.”

Yet the Schlossbergs, who had been married 35 years when Nancy retired, eventually landed in a new rhythm that worked well for them.

Says Nancy: “I came to love and appreciate that there was somebody who wanted to know where I was going and what I was doing.”