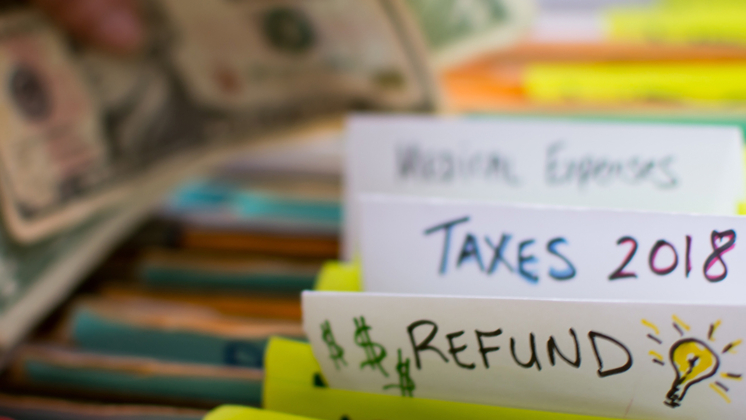 If you’re used to receiving a plump tax refund come April, you may be caught by surprise this year. Millions of Americans accustomed to a refund may find that it’s shrunk this year, or that they even owe money to the IRS.

In the first week of the 2019 tax season, the IRS reports, the number of refunds issued dropped by nearly 25% and the average refund was 8% lower than a year earlier.

A smaller refund, however, isn’t the same as a higher tax bill: A majority of Americans got a tax cut thanks to the sweeping reform bill the was signed into law in late 2017.

In the first week of the tax season, the average refund was 8% lower.

One reason your refund may not be as hefty is that last year the Treasury Department issued new guidelines for how much employers should withhold from your paycheck to reflect the tax cuts. That means Americans saw the effects of lower taxes in every paycheck, not just at filing time.

Another possible cause for some: the new limits on how much you can deduct in state and local property and income taxes.

Many Americans count on their tax refund for a savings cushion, or at least use it as extra spending money. If the slope in refunds continues, notes Mark Hamrick, senior economic analyst at Bankrate, that could have an impact on spending and the economy.

The IRS says it’s still too early to say if this trend of reduced refunds will continue into April, since the data reflects only returns filed through Feb. 1, and the government shutdown caused a delay in processing filings.

Regardless, those who’ve already seen a smaller refund aren’t happy about it. Some have taken to social media, using the hashtag #GOPTaxScam to try to raise awareness of perceived government injustices.

Since a tax refund is essentially an interest-free loan to the government, a smaller one isn’t all bad. Still, three out of four tax filers typically get refunds. Getting used to a smaller one is easier said than done.