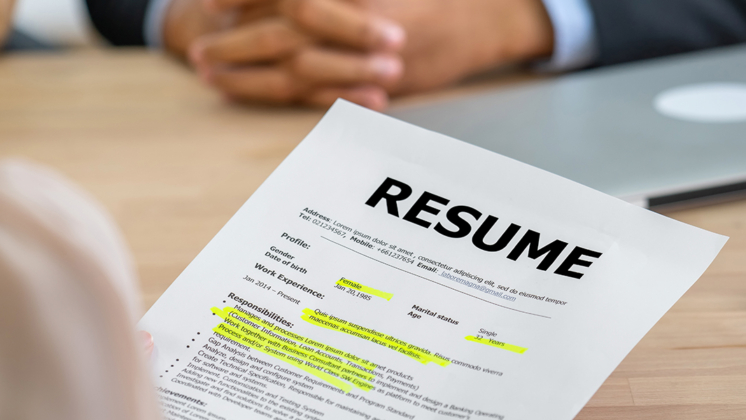 In a survey by the career counseling site CAREEREALISM, of the 55% of professionals that identified as “seasoned workers” or “mid-life career changers,” 87% responded that they think age discrimination is hurting their job search.

Certain industries are especially tough for seasoned workers. In the technology sector, for instance, baby boomers and Gen X-ers are both at higher risk for age discrimination. A survey by Dice Insights found that 68% of boomers in tech say they’ve been discouraged from applying for a position because of their age.

Simply landing a job interview in the first place can be tougher too. In a 2017 study from the Federal Reserve Bank of San Francisco, researchers looked at how often fictitious resumes of men and women ages 29 to 31, 49 to 51, and 64 to 66 led to interview requests.

The findings: The callback rate was uniformly lower for older applicants, especially for women. For example, 64- to 66-year-old women applying for administrative jobs were contacted for interviews 47% less often than their 29- to 31-year-old counterparts were.

Even if you do land an interview, age discrimination may crop up in the kinds of questions you face. Knowing how to respond to a query that reveals bias could help you stay in the running for that job.

This question is in violation of the Title VII Civil Rights Act and the Age Discrimination in Employment Act (ADEA), and it can expose an employer to a lawsuit, says Deborah Burkholder, executive director at the Institute for Career Transitions.

Some questions are in violation of the Age Discrimination in Employment Act, but not all hiring managers are well versed in ADEA restrictions.

That said, a lot of hiring managers aren’t well versed in ADEA restrictions and still ask candidates their age.

There are a couple of ways you can respond. Try to steer the conversation toward your experience, “with an emphasis on what you’ve done most recently, rather than a detailed overview of a 20- or 30-year career,” recommends Marci Alboher, author of The Encore Career Handbook: How to Make a Living and a Difference in the Second Half of Life.

For example, you could pivot by saying, “I don’t think age is important, so let me explain how my experience makes me a great candidate.”

But keep in mind that any kind of confrontational response might bring your chances of being hired to a halt.

2. “What year did you graduate from college?”

Some hiring managers try to ascertain your age indirectly by asking about educational milestones. Although that question isn’t illegal under the ADEA, you may want to answer it without revealing any details.

Try to focus the discussion your education, not your era. “As you can see on my resume, I graduated with a bachelor’s degree with academic honors. Would you like to hear more about my studies?”

3. “How have you kept your skills fresh?”

Don’t take this question as a personal attack — use it as an opportunity to showcase your skills. “You have to launch into marketing mode and really sell yourself,” says Susan P. Joyce, an online job search specialist and editor of Job-Hunt.org.

4. “We have state-of-the-art technology. Do you know how to use it?”

While this is similar to the previous question, it requires a different tact. Your best approach, Joyce says, is to ask this follow-up question: “I’m very comfortable using new technology. What specific technology are you asking about?” Then offer an anecdote that shows how you’ve applied the technology to a job in the past.

Don’t know that particular tool or program? Be honest about it, but also make the case to the interviewer that you can learn it on the job quickly. (“I’m not familiar with that software, but I’m a rapid learner. I’m confident I can pick up whatever it takes to perform the job.”)

5. “Will this position be challenging enough for you?”

“This is a classic way of asking an experienced candidate if she is overqualified,” says Alboher. To allay the interviewer’s concern, Alboher recommends this response:

“First, I get a lot of satisfaction in doing something well, whatever the job. Second, I see many challenges in this role. Finally, I’m at a point in my career where mentoring and learning from others is really important to me, and I see many ways to do both of those things in this role and environment.”

6. “A lot of our employees are fresh out of school. Does that bother you?”

Interviewing for a job at a startup largely comprised of millennials, or simply at a company with a lot of young professionals? Be ready to explain why you look forward to being a senior member of the staff.

One response, says Alboher: “Quite the opposite: that thrills me. I welcome the chance to work alongside and learn from younger people, and I have a feeling they’ll learn from me as well. I know that requires some humility, and I’m comfortable with that.”

Another approach? Burkholder recommends this answer: “I know that diverse teams with respect to age, culture, and gender perform better, and I enjoy being part of a high-performing team.”