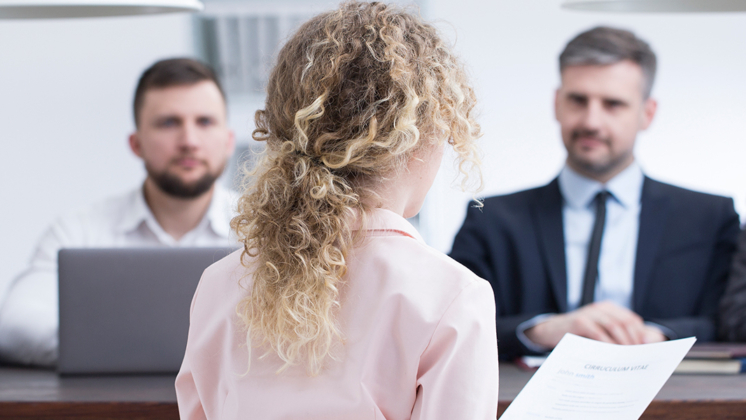 Employers aren’t allowed to discriminate based on race, gender identity, skin color, religion, sexual orientation, national origin, age or disability. But unless an employer flat-out tells a potential hire that they didn’t get a job because, say, they were a woman or older than 65, discriminatory practices can be hard to spot — and discriminatory interview questions even more so.

Questions that seem innocuous at first glance may actually be fishing expeditions for legally protected information. Here are some questions that aren’t OK, along with suggestions for appropriate ways to respond.

1. How long have you been working?

It’s a roundabout way of asking how old you are, which is one of the chief no-nos. Hiring managers certainly don’t want to be formally accused of ageism, but they’ll still try to subtly find out your age by asking questions like “how long have you been in the workforce?” or “when did you graduate from college?” in order to get a ballpark number in their head.

Try to shift the discussion back to your relevant experience by discussing the field you studied or the skills you’ve acquired throughout your career.

2. Do you have children?

Though you may think the interviewer is just making small talk, be aware of the possible hidden meanings that can come with this question. Is the interviewer trying to suss out how dedicated you’ll be to the job if you’re also a parent?

If your gut is telling you it’s just a friendly question from person-to-person, rather than from company-to-potential hire, then feel free to answer. But if you suspect anything shady, you are well within your rights to respond with a firm but polite assurance that your personal life will not interfere with your professional life.

Some positions may come with specific physical requirements, like the ability to lift 50 pounds or stand for long stretches of time. Employers have the right to ask if you are capable of performing those tasks. But anything that isn’t directly related, like queries about prescription medications or disabilities, is off-limits. The Americans with Disabilities Act (ADA) has a wide umbrella of coverage, running the gamut from mental illnesses to digestive system maladies, and the chances of having at least one covered — and thus, protected by law — condition are high.

If you are asked an irrelevant and illegal question about your health during an interview, you should feel free to decline to answer, or respond with a reassurance that you will be able to capably perform the duties of the position.

4. Is English your first language?

If this sounds like a not-so-subtle way to ascertain your ethnicity or nation of origin, that’s because it is. Employers are not allowed to ask if English is your first language; if language proficiency is relevant to the job, e.g., for a translator position, they may ask what languages you read, speak or write fluently, but not which one you learned first.

5. What country are you from?

In the same vein, it is illegal for companies to ask where you are from or if you are a U.S. citizen. They are, however, allowed to confirm that you are legally authorized to work in the U.S. (or in whichever country the job is located), but your citizenship status is none of their business.

If faced with any of these illegal ancestry-relative questions, remember that you do not have to answer; try steering the interview back on track with a reassurance that you are legally authorized to work in the country and can skillfully speak the languages required for the position.

6. Have you ever been arrested?

While there’s technically no federal law prohibiting companies from asking about criminal activity, most states have their own laws regarding the use of arrest records in hiring decisions.

In general, employers cannot ask about arrests alone, but they can ask about convictions. Even if they are allowed to inquire about arrests, they are not permitted to use this information in hiring decisions unless it directly relates to the role you are applying for and is a relatively recent arrest. Having a conviction record does not automatically disqualify you for most employment, but this varies from state to state, and different industries have different rules.

If you are asked about any existing arrest records in an interview, you should inquire how that information would be relevant to the job before you think about answering. Chances are, it isn’t, and they were just hoping to catch you off guard.

This is another seemingly innocent question that may actually contain furtive undertones: maybe they’re trying to find out your marital status or sexual orientation, or even financial situation, all of which they’re not allowed to ask about.

You are not legally required to answer this question. But if you choose to, you can say something tactful but vague like,”I live with my family,” which really could mean anything from a household of cats, to a spouse and children, to an adopted “family” of close friends.