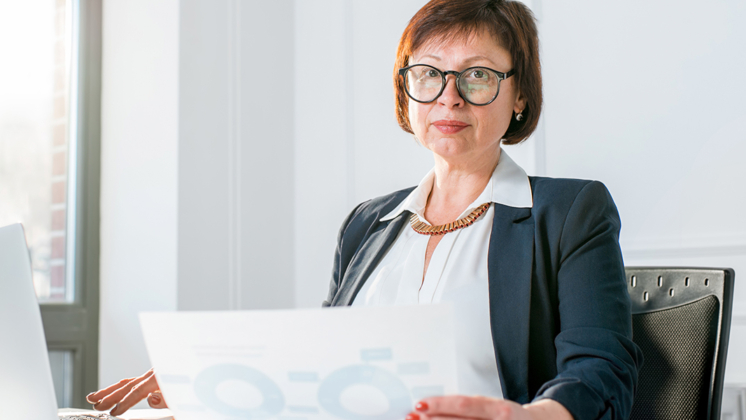 In this economy, uncertainty is suddenly everywhere, and no industry is immune. Maybe you’re not ready or able to retire, but your current career just isn’t doing it for you anymore. Interests change, skills change, goals change. But never fear — you don’t need to stay in a field you’re no longer passionate about. Need proof? Look no further than these 11 illustrious people who pursued a completely new career post-50.

Harland Sanders’ finger-licking good chicken may be world-renowned now, but it took him several decades to find that sweet spot. Sanders held a number of jobs before 50, including farmer, fireman, insurance salesman and streetcar conductor.

At 40, he began running a Kentucky service station, where he also offered fried chicken to hungry patrons. By 1935, Sanders’ recipe had become so regionally famous that Governor Ruby Laffoon honored him with an official Kentucky colonel title. The Colonel franchised in 1952, at the age of 62. He was in his 70s when he sold his interest in KFC for $2 million — and that’s not chicken scratch.

The Little House on the Prairie author started her career as a teacher when she was just 16, but later admitted that she never particularly cared for it. She and her husband Almanzo became proficient at farming, and she began writing articles for local farm journals on the side. She also worked at the Farm Loan Association, helping local farmers get loans.

Like so many others, the Wilders took a hit during the Great Depression — and that’s when she tried her hand at writing novels. First published in 1932 when Ingalls was 65, the Little House books have delighted children and adults alike for nearly 90 years.

There’s a good chance his cake mix is in your pantry right now, but Duncan Hines — who was indeed a real person — didn’t discover his culinary career until he was 55.

A seasoned traveler thanks to his career as a salesman, Hines assembled a widely circulated list of quality restaurants across the U.S. His reviews eventually led to a book, Adventures in Good Eating, and in turn, a line of baked goods bearing his name. Hines was never much of a cook himself — but he sure knew how to spot ‘em.

The McDonald’s magnate was, like several other entries on our list, a salesman by trade. It was during one of his cross-country jaunts selling five-spindle milkshake mixers to drugstores and restaurants that Kroc, then 50, met Dick and Mac McDonald.

Wowed by their self-service burger joint, he quickly convinced them to franchise. Kroc transformed himself from a guy hawking milkshake mixers to a bonafide burger baron: By 1965, at the age of 63, McDonald’s had opened 400 restaurants in 44 states.

The founder of GEICO (not pictured) didn’t hit the ground running in the insurance world until he was 50. In 1936, the former accountant established the company as a pioneer in low-cost insurance, first targeted at government employees (GEICO originally stood for Government Employees Insurance COmpany).

Everyone’s favorite French chef led a fascinating life long before she became famous: Her career began at the Office of Strategic Services, a government agency that would later become the CIA. There, she helped develop a shark repellant, and later served as Chief of the OSS Registry, complete with top security clearances.

After marrying Paul Child, Julia took a cooking class at Le Cordon Bleu — and was deemed “unqualified” to move into the haute cuisine course. She eventually conquered it, obviously, publishing Mastering the Art of French Cooking, Volume One, in 1961. She was 49. The resultant TV show, The French Chef, debuted two years later, introducing Julia’s effervescent personality to the world.

This Japanese real estate mogul had retired as the head of the School of Commerce at Yokohama City University in Tokyo before he made his billions. Yes, billions. Mori’s investments in downtown Tokyo real estate shot him to the top of the list of the world’s richest people in the early ’90s.

Anna Mary Moses, better known as folk artist Grandma Moses, began painting at the age of 77 as a hobby “to keep busy and out of mischief.” She originally charged $3 to $5 for her original pieces, but prices skyrocketed to $10,000 by the time she died at the age of 101 in 1962. In 2006, her painting Sugaring Off sold for $1.36 million at a Christie’s auction.

The celebrated author had five decades under his belt before Dracula was published in 1897. Although Stoker had a few writing credits to his name, including some short stories and a thrilling non-fiction work entitled The Duties of Clerks of Petty Sessions in Ireland, his main line of work was managing the Lyceum Theater, one of the most successful venues in London.

Perhaps one of the most famous career switches in recent history, actor Ronald Reagan was 54 when he announced he was running for governor of California in 1965. His political career worked out well for him, of course — he became the 40th president of the United States in 1981.

The Terminator followed in the Gipper’s footsteps 22 years later, leaving a successful career in Hollywood to become the governor of California in 2003 at the age of 56.

Questions that seem innocuous at first glance may actually be fishing expeditions for legally protected information.

How long have you been working?

It’s a roundabout way of asking how old you are, which is one of the chief no-nos. Hiring managers certainly don’t want to be formally accused of ageism, but they’ll still try to subtly find out your age by asking questions like “how long have you been in the workforce?” or “when did you graduate from college?” in order to get a ballpark number in their head.

Try to shift the discussion back to your relevant experience by discussing the field you studied or the skills you’ve acquired throughout your career.

How is your health?

Some positions may come with specific physical requirements, like the ability to lift 50 pounds or stand for long stretches of time. Employers have the right to ask if you are capable of performing those tasks. But anything that isn’t directly related, like queries about prescription medications or disabilities, is off-limits. The Americans with Disabilities Act (ADA) has a wide umbrella of coverage, running the gamut from mental illnesses to digestive system maladies, and the chances of having at least one covered — and thus, protected by law — condition are high.

Who do you live with?

This is another seemingly innocent question that may actually contain furtive undertones: maybe they’re trying to find out your marital status or sexual orientation, or even financial situation, all of which they’re not allowed to ask about.

You are not legally required to answer this question. But if you choose to, you can say something tactful but vague like,”I live with my family,” which really could mean anything from a household of cats, to a spouse and children, to an adopted “family” of close friends.