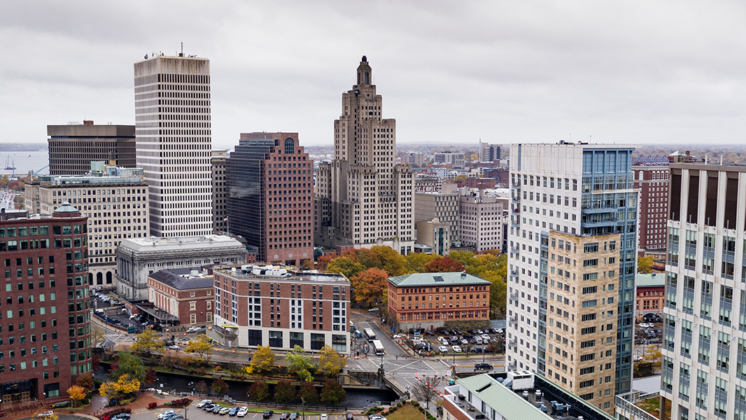 Do you live to shop? Then Providence, Rhode Island, might be calling your name. Because it’s there, in the Littlest State’s capital city, that you can reside in the country’s oldest indoor shopping mall.

But when trips to the mall began to be replaced by visits to Amazon and eBay, and brick-and-mortar businesses began transitioning to online storefronts, the Arcade started to feel a bit like a relic from the past. So the city came up with an idea: transform part of the mall into residential dwellings.

With the help of the creative giants at Northeast Collaborative Architects, the big idea became to think small and turn the mall’s top two floors into 48 micro-loft apartments, which range in size from 225 to 800 square feet, while keeping the ground floor a space for equally teeny retail shops (with no chain stores allowed).

The redesigned space officially welcomed its first residents in 2015, with rents starting as low as $500 per month. Over time, and due to popular demand, those rents have risen to between $800 and $1800 per month. (Though the bulk of the apartments are studios or one-bedrooms, there is one two-bedroom and one three-bedroom loft.) While 225 square feet may be half the size of some people’s walk-in closet, the streamlined spaces make use of every inch, built-in cabinetry and drawers underneath the platform beds.

The project has been a boon to individuals who want to be in the city, but who would have otherwise been driven out by rising rents and real estate prices — including some of the first-floor shop owners.

“There’s a real sense of community here,” Robin Dionne, Arcade Providence’s director of outreach and client relations, told TODAY shortly after the residences opened. “We have people in all stages of life. Young graduate students like it because there are smaller apartments where furniture is built in, and I think they’re looking for something affordable. Then you have those who are retired and keep this as a second or third apartment — it’s a smaller commitment than home ownership. We’ve also got emergency room doctors, firefighters.”

Perhaps unsurprisingly, nabbing yourself one of these perfectly situated pads isn’t always easy. Since its opening, occupancy has been at 100% — with a waiting list of more than 4,000 names. But Dionne swears that apartments do open up and scoring one isn’t as impossible as it might seem. “When an apartment opens up, we send an email to every person on that list and take it from there on order of responses,” she told TODAY, noting that they generally have responses in the hour.

So if you want to get in there, you’d better be willing to act fast. Even if the sweet smells of Cinnabon are long gone.