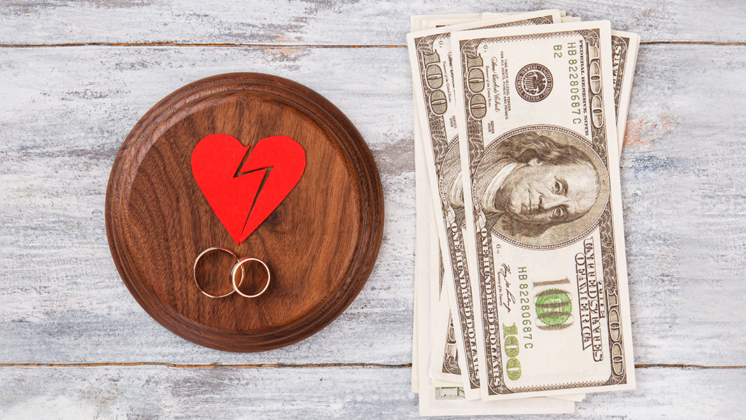 When my ex-husband died suddenly from an undiagnosed heart condition in 2017, I was completely unprepared on just about every front, from the challenge of supporting our daughter through her grief to the array of emotions that engulfed me, to the nameless role that I now played in the eyes of our friends and family (“widow” doesn’t apply; I’m still not sure what word does).

What I thought I could handle were the finances. At the time of his death, I’d written about personal finance, investing, and estate planning for more than 10 years, and I thought I knew what to expect.

But just as divorce complicates much of the rest of life, it complicates how money and possessions are distributed after death. It took our families more than a year, including some very delicate conversations and the involvement of several professionals, to settle my ex’s estate—in large part because he hadn’t updated his will or financial paperwork after we split.

Here’s what I learned about how divorce affects estate plans—and what you can do to avoid these issues.

Your ex may still have a say in your estate

Personal finance advice—including many stories I’ve written over the years—often emphasizes the permanence of a will. But it turns out that divorce changes everything, even if the will itself hasn’t changed.

My ex didn’t update his will or other estate planning documents after our amicable divorce in 2014, and I was still listed as his executor.

But in Maine, where we live, and in many other states, the courts assume that the person who died wouldn’t want their former spouse overseeing their affairs. “In most states, the law sort of acts as though the former spouse has died,” says Crystal Patterson, who serves as general counsel and family office director for Gulfstream; previously she spent 15 years in estate litigation.

That’s what happened in our case: My ex’s estate was settled by his brother, who’d been named in the will as a successor to me. And since I was removed as the beneficiary of the estate, all his assets went to his next of kin: our daughter.

But while state laws generally address what happens if an ex-spouse is named in a will, they aren’t nearly as comprehensive when it comes to other estate planning documents, such as a power of attorney and healthcare directive, says Patterson.

That means if you haven’t updated these documents, your ex-spouse could have the right to make financial and end-of-life medical decisions on your behalf.

Life insurance has its own rules

Even financial planning experts generally believe that life insurance beneficiary designations are immutable. Several years ago, I wrote a story on this topic and quoted a certified financial planner who put it bluntly: “The person on the beneficiary form gets the money.”

But when it comes to ex-spouses, this, too, is dependent on state law. In Massachusetts, for example, where an insurance examiner unfamiliar with New England postal codes thought we lived, a former spouse is kicked out as a beneficiary. But in Maine, the proceeds of life insurance policies are distributed to beneficiaries as written, regardless of divorce.

Alicia Waltenberger, director of wealth planning strategies at TIAA, notes that about half of states have what’s known as a “revocation on divorce” statute, meaning that any beneficiary designation in favor of an ex-spouse will be revoked once a divorce is finalized.

That’s true for all “non-probate” assets, meaning those that pass to a beneficiary outside of a will, such as  life insurance policies, some retirement accounts (more on those in a minute), and some forms of real estate ownership.

I feel certain that my ex wouldn’t have objected to me receiving the life insurance proceeds, which I’ve placed in trust for our daughter. But if he’d remarried, or in any number of other scenarios, that sequence of events could have been incredibly problematic.

“We find almost once a month that an ex-spouse is still a beneficiary on a policy that isn’t court-ordered and isn’t wanted,” says Howard Sharfman, the senior managing director of NFP Insurance Solutions and a member of the board of directors for Life Happens, a nonprofit founded by the insurance industry to provide consumer education.

“I don’t have an ex-spouse, but if I did, I can’t think my current spouse would be too happy about that prospect,” he adds.

My ex was self-employed, so he didn’t have a 401(k) plan or any other employer-based retirement savings account that’s governed by ERISA, the federal law for private retirement plans.

If he had, says Waltenberger, the situation would have been clear: “The last named beneficiary would receive all the retirement plan proceeds, regardless of whether they’re still married to the decedent.”

Your ex-spouse could have the right to make financial and end-of-life medical decisions on your behalf.

However, IRAs don’t fall under ERISA rules. So the distribution of those assets relies on state law, including the “revocation on divorce” laws mentioned above.

“About half the states are going to revoke a beneficiary designation that’s in favor of the ex-spouse,” says Waltenberger. “The other half are going to keep the surviving ex-spouse in there as a potential beneficiary.”

On one of my ex’s IRAs, there was no named beneficiary; he had simply checked the box labeled “spouse.” The account custodian—perhaps improperly—decided that since he no longer had a spouse, his estate should receive the funds.

Solutions for a problem no one anticipates

Granted, in the midst of divorce proceedings, estate planning might be close to the last thing on your mind. But it’s relatively easy to make sure your wishes are adhered to. Just follow these steps:

Update your will: In some states, you may not be able to write a new will until your divorce is final. As soon as you can do that, review your selections for executor, guardians of any minor children, and beneficiaries, and make any needed changes.

“We find almost once a month that an ex-spouse is still a beneficiary on a policy that isn’t court-ordered and isn’t wanted.”
Howard Sharfman, senior managing director of NFP Insurance Solutions

Change your power of attorney and health care proxy: If you don’t want your ex making financial or medical decisions on your behalf, have your attorney revoke your current directives and draft new ones.

Add a contingency: You’ll also want to review  the beneficiary on your life insurance policy and retirement accounts, though you likely won’t be able to change them until your divorce is finalized. Before divorce proceedings begin, however, you can add a safeguard: naming a contingent beneficiary in case state law kicks out a former spouse, or naming a trust as the beneficiary.

In our case, navigating all these complexities required lots of sensitive conversations with my ex’s family. Fortunately, everyone agreed that my daughter was the priority, and we all made financial decisions with her best interests in mind.

Despite the positive outcome, though, I wouldn’t wish this process on anyone. A complicated, emotionally fraught situation was made even more complex by all the machinations the money required.

Since then, I’ve pored over my own estate plans and beneficiary designations, making sure that my intentions are absolutely clear. Should I ever remarry, I’ll do the same. And I hope you do, too.