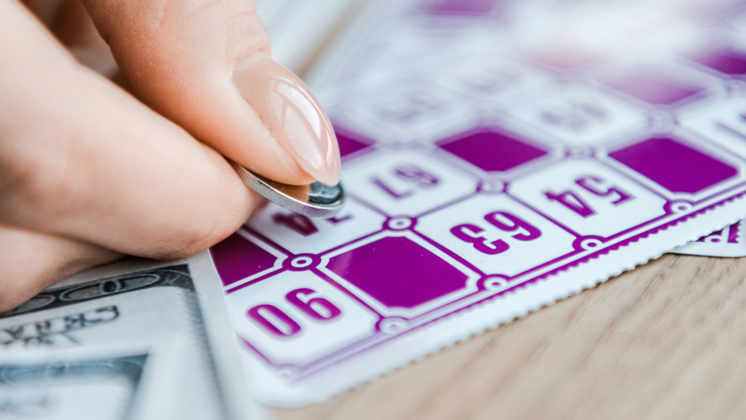 Walk into almost any gas station convenience store in the United States or Canada and you can try your luck. For as little as $1, you can buy yourself a small piece of paper, parts of which are covered in a silvery latex. Scratch off that latex area and, if you’re lucky, you can win a few bucks.

And if you’re really good at math, maybe you don’t need much luck. Just ask Canadian statistician Mohan Srivastava — and the Canadian lottery board, which designed this game:

The Ontario Lottery and Gaming Commission issued this game in 2003, and the rules are pretty simple. On the left is a box that says “Your Numbers.” You scratch the latex covering that area, revealing 24 different numbers. If those numbers appear on the tic-tac-toe boards on the left, great! You’re on your way to winning some extra cash. They just need to line up properly — you need three in a row, column, or diagonally, just like in tic-tac-toe. If that happens, you win the prize indicated..

In June of 2003, according to Wired, Srivastava was cleaning his desk when he came across a couple of these scratch-offs — most likely a gag gift from a friend. (Statisticians typically don’t buy lottery tickets; the math doesn’t add up.) One of the tickets was a winner, and for Srivastava, it became a point of professional curiosity. He inspected the winner a bit more and saw a pattern — a pattern that suggested the game was beatable.

Take another look at the ticket above, and pay particular attention to the bottom-center square on the 4th game as well as the center-left square on the 7th and 8th game. You’ll note that the number 15 appears in all three locations.

Srivastava surmised that, unless the Gaming Commission wanted a lot of winning grids on one ticket, it didn’t make a lot of sense for a repeated number to be one of “your” numbers. By extension, he postulated, numbers that only appeared once among the eight grids — “singletons,” as he termed them — were more likely to be winners. If a card had three singletons in a row, column, or diagonal, Srivastava concluded, it had a very good chance of winning. (The card above was one such example: the middle row of grid 6 is 24-12-29, each of which is a singleton.)

Srivastava grabbed $60 and ran a test. According to the Toronto Star, he “chose 20 tickets currently on sale in Ontario, predicting six would be winners” because they had this triplet of singletons. And while not all six were winners, four of them were. Srivastava estimated that there was only about a 2% chance of this happening. He was rather sure he found a way to beat the odds.

“I decided to send the lottery commission 20 tickets that I had separated into winners and losers … They realized that they really did need to talk to me.”
–Mohan Srivastava

But untold riches weren’t on the horizon for Srivastava. “Once I worked out how much money I could make if this was my full-time job, I got a lot less excited,” Srivastava told Wired. “I’d have to travel from store to store and spend 45 seconds cracking each card. I estimated that I could expect to make about $600 a day. That’s not bad. But to be honest, I make more as a consultant, and I find consulting to be a lot more interesting than scratch lottery tickets.” (Kids: become math consultants. It’s a good job.)

Srivastava did the next best thing: he told the Gaming Commission about the flaw. At first, they didn’t believe him, but as he told NPR, “I decided to send them 20 tickets that I had separated into winners and losers. I said go ahead and scratch them off. And they did and they realized that they really did need to talk to me.” The Commission fixed the game, ruining the trick for everyone else in the process.

Lottery tickets, the saying goes, are a tax on those who are bad at math. By and large, you’re going to lose money the more you play. And in 2016, Glenda Blackwell of Leicester, North Carolina, wanted to make that point to her husband, who in her view had an unhealthy affinity for the lottery.

He asked her to buy him some Powerball tickets but instead, she bought a single $10 Carolina Millions scratch-off ticket, intending to demonstrate that gambling this way was a fool’s errand. She told the local news, “I was going to be ugly and buy a scratch-off to show him they didn’t hit. Sometimes I get aggravated with him, so I tell him, ‘You’re just wasting your money.'” But when she scratched off this ticket, her plan went bust in the best way possible: the ticket was a $1 million grand prize winner.

On sale now: Dan Lewis’s new collection of fascinating facts spanning history and sports to science and pop culture that will have you proudly stating, “Now I know!”

25 of the most memorable products in Shark Tank history