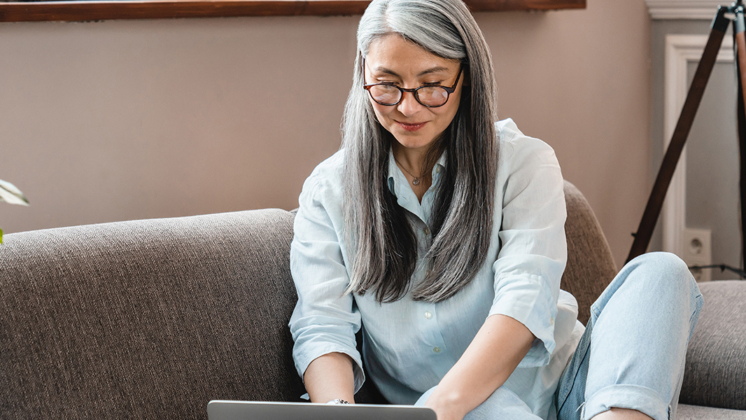 In polite parlance, you could say that she’s a change-maker, a no-nonsense advocate for getting rid of ideas and mores that don’t work anymore. Or, as she would say: “I like to blow shit up.”

So now, she’s taking that same ethos to aging.

As AARP’s ambassador to their campaign called Disrupt Aging, Gallop is trying to re-jigger the aging process so you don’t freak out any time a new wrinkle pops up around your eyes. Beyond that, she’s trying to get everyone—men, women and businesses—to stop undervaluing older folks once their AARP subscription lands on their doorstep with a resounding thwack.

To Gallop, who was born outside London, her new gig is simply an extension of the work she’s been doing forever.

“I’ve been combating ageism for years,” she says. “ I would never ever want to be young again. Life just gets better the older I get. The single best thing about being this age is that I don’t give a damn what people think. In my 20s and teens I was the subject of rampant insecurities.”

When AARP asked her advice on fighting ageism, she didn’t miss a beat: Challenge and change depictions of aging in advertising.

“Our industry is a very, very powerful force in shaping culture, along with movies, television, literature, and it’s ageist as fuck,” she says. “It does have tremendous impact on people’s attitudes and behaviors. There is a lot of discussion about how gender is depicted in advertising, how diversity is depicted.

But she sees little nuance in the way age is portrayed in advertising.

“If you look at how age has been depicted in advertising—at one end are beautiful blonde-haired, white-haired, blue-haired, gorgeous older people walking on the beach in the sunset with a golden Labrador,” she says.

At the other end are “ridiculously comical parodies and caricatures of older people.”

The irony, she notes, is that it’s the older folks who have discretionary income—but that’s hardly reflective in advertising.

The solution ? Hire older people to run the show.

So what can you do to #DisruptAging ? Here are a few of Gallop’s tips.

1. Scream your age from the top of the tallest building

“I tell everybody I’m 59 as frequently as possible,” she says. “I’ve done this for a year. My philosophy is the opposite of what you hear, that age is just a number. I disagree. Your age is a very special number. It’s the sum total of you.”

“I have been combating ageism for years. I would never ever want to be young again.”
Cindy Gallop
AARP Ambassador for #DisruptAging

“You are the sum total of all of your life experiences, learning, insights, education to date,” she continues. “Your age is the expression of the tremendous value you have because of that. So, I’m encouraging everybody to say their age.”

She believes that ageism is so entrenched in our society that many people go into job applications already defeated.

“I say to people—do not do the thing the recruiters advise and take a few years out of your resume or hide your age,” she expounds. “Say your age, proclaim your experience, and say ‘I’m bloody brilliant at doing this because I have this many years of experience.’”

2. Talk about loss and death

The two things people don’t want to talk about are sex and death, Gallop says.

And just like sex, if you treat death as a taboo subject, it creates much more stigma.

“There are young funeral directors who are completely reinventing the way you approach death and also the way we approach grieving, like modernloss.com,” she notes.

One way to disrupt aging: Stop adding the words “for your age” at the end of compliments or observations. As in, “You look great for your age.”

“No, I LOOK my age and I’m really happy to look my age,” Gallop says. “I love looking my age! Do not give friends or relatives birthday cards that make fun of age. I went to buy a birthday card for a friend. They all made fun of their age! I refuse to buy cards. I’ve reccomended to AARP that #DisruptAging partner with Hallmark.”

“The assumption is that everyone wants to live young,” she says, when we should say “Live OLDER.”

What’s so great about living older?

“I want everyone to aspire to live older.”
Cindy Gallop
AARP ambassador for #DisruptAging

“There are so many great things about living older: Having more freedom, having more money and getting to travel and do all the things that younger people aspire to,” she says. “I want everyone to aspire to live older. I want older people to talk about the way they live, so that advertisers and brands will realize that the really aspirational lifestyle is OURS.”

As for the old saw that women turn invisible after 50, Gallop doesn’t buy it.

“I don’t feel invisible,” she says. “I don’t give a shit. I walk into an event where people don’t know who I am—men’s eyes slide over an older woman and they’re not interested in who you are. It’s enormously entertaining to me.”

Gallop also wishes employers would realize the economic aspect of her anti-ageism campaign. To her, the most egregious aspect of ageism is that companies and employers don’t realize their loss in not hiring and promoting older people.

“It’s a gaping hole in the American economy,” she says. “If this situation was completely reversed and companies embraced and begged for the talents and skills of older workers—OH MY GOD—would we see this country’s economy rebound in a staggering way.”

Gallop wants you to know: Your sexuality only gets better and better the older you get.

“I consider myself more and more attractive and desirable the older I get,” she says. “I date younger men in their 20s, and I’ve never been told so many times how beautiful I am since I’ve been dating younger men.”

Gallop maintains that her casual relationships—built on trust and respect, she notes—last a lot longer than other people’s “serious” ones.

“We stay friends because we like each other,” she says. “I have never wanted marriage. or children. I’m not a relationship person. I date younger men for sex.”

7. Make friends of all ages

The future is cross-generational.

“The future is younger people and older people working together as equal partners on business challenges and work together,” she says. “Not only are the older very direct coaches and mentors for younger people, the two-way flow of ideas and inspiration—that’s the future of business.