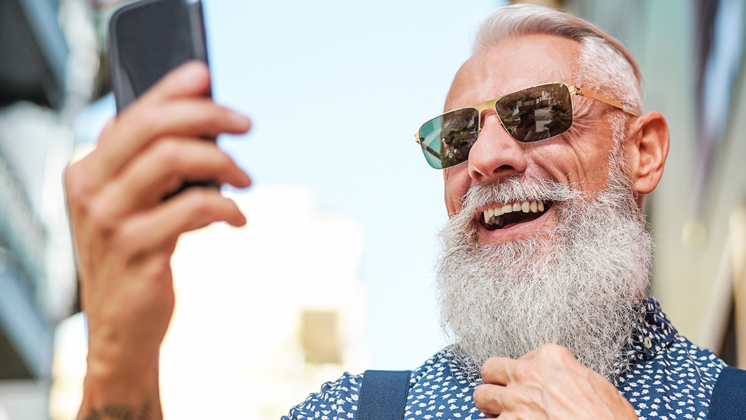 When you think of an Instagram influencer, a few images probably come to mind: perhaps of tan, beautiful 20-something models with perfect hair flaunting candid-looking photos of clothing and products they’re sponsoring on a beach or in a hip, minimalist cafe.

“Influencer” became an actual job title thanks, at first, to model/celebrities like the Kardashians and the Hadids, and later to YouTubers and bloggers who amassed online followings on various online platforms.

While plenty of these young models make a pretty penny by posting a perfect photo of their coffee or handbag online, the conversation has started to shift.

Lots of celebrities and influencers are dropping the too-perfect, curated look.

Lots of celebrities and influencers are dropping the too-perfect, curated look and opting for a less-filtered, more honest peek into their daily lives.

At 58 years old, Dian shares her older influencer celebrity with the likes of Beth Djalali, a 61-year-old fashion blogger with 77,000 followers on Instagram; Shauna, 59, whose 83,000 Instagram followers come for her fashion, fitness and lifestyle content; and Teri Turner, a food blogger and cookbook author with more than 270,000 Instagram followers. They’re just a few people changing the way older folks are perceived online for the better, and injecting a daily dose of positivity into our social media feeds.

That’s the world many older influencers live in. Yes, that’s right: There’s a whole host of influencers over 50 with thousands, even millions, of followers online. From money-saving tips to travel inspiration to fashion, there’s an influencer 50 or older who covers the sort of content you like to see online.

We spoke with Dian Griesel, aka Instagram’s @Silverdisobedience, to find out what it’s like to put a face to older online users.

Dian is an author and blogger, and she owns a PR firm. She never intended to go into modeling — she’d done some acting in her 20s, but found herself thrown into the world of Instagram fame when she went on a commercial casting call with her skateboarder son and began doing regular commercial work.

A makeup artist on set had heard that established modeling agency Wilhelmina was looking for a “Silver” model, submitted Dian, and voila — her modeling career took off.

Dian never set out to be an influencer the way plenty of younger models did. “I fell into this!” she said. “I’ve always loved to write, it started as my meditation. And Instagram is such a visual platform, I love sharing images along with my stories and seeing the kind of communities they create.

Sure, Dian acknowledged, her generation wasn’t born into Instagram, but keeping up with new technology has been a part of her life for years.

“I remember a colleague coming up to me and telling me about this new website called AOL,” she said with a laugh. “He said, ‘I’ll be able to send you a message online, and you can write back to me immediately!’ It’s not about being born into the technology as much as it is deciding to embrace it.

Dian is upbeat about the role social media plays in her life, and the lives of her followers. Her influencer status has brought all kinds of people into her life — and not just those in her same age bracket.

“I have one follower who’s a 15-year-old boy and one who I know to be 103 years old,” she said. “It’s all about engaging with the community, and I do — I talk to my followers, and it brings me such joy.”

Dian’s influencer status has brought all kinds of people into her life — and not just those in her age bracket.

Plenty of young people have cited social media as detrimental to their self-esteem and mental health: They spend too much time comparing their looks and lifestyles to others’, no matter how edited or perfectly curated they might be.

Dian said she tries to be as honest and open as she can be — a trend many older influencers employ that’s catching on among younger social-media users as well. As Dian sees it, there’s no point in comparing yourself to other people, online or otherwise.

When asked if Dian feels an age bias in her industry, she said she hasn’t run into that too often. “Everything I’ve done has led me to what I put online,” she told us.

While Dian said in an Instagram post that she doesn’t “think [she] know[s] what it means to be wise,” so much of what makes her and other older influencers compelling is the perspective they can offer via a medium that seems to be dominated by users half their age.

“You’ve never existed before, and you’ll never exist again. There is only one you. This is it, and you have to go out there and do everything you’re called to do.”