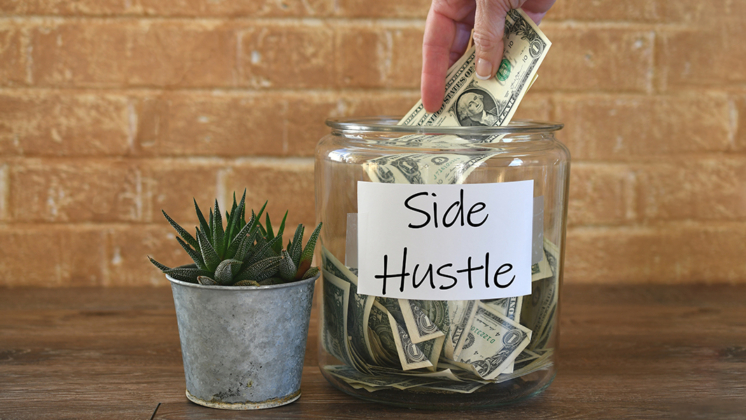 With the gig economy booming, even workers with traditional jobs are getting in on the action: Nearly four in 10 Americans earn extra money from a side hustle, according to a new survey from Bankrate.

Millennials are more likely than any other age group to have a side gig: 38% of them pick up extra work at least once a month, while only 27% of 50- to 65-year-olds do the same, with crafts and home repair/landscaping the most popular part-time jobs for these older workers.

The financial payoff probably won’t be huge. For those who do extra work at least once a month, earnings average $836 a month, though two-thirds bring in less than $500 a month.

Yet even a small amount of extra income can be a big opportunity to plump up your long-term savings in the home stretch to retirement.

The best uses for the extra cash

Need motivation to start hustling? According to Northwestern Mutual’s 2018 Planning and Progress Study, one in three baby boomers has no more than $25,000 saved for retirement.

“They’re scrambling to make more money because they’re approaching retirement and realizing what they have saved isn’t going to last,” says Kathy Kristof, editor of SideHusl.com, a resource and education site for gig workers.

Need motivation to start hustling? One in three baby boomers has no more than $25,000 saved for retirement.

If you can pull in Bankrate’s overall average of $686 a month, that’s roughly $8,200 a year, which can go a long way toward rescuing your retirement. Just over half of 50- to 64-year-olds report that their gig income isn’t for regular living expenses.  So that’s money that can be saved.

Another potential use for these extra funds: debt repayment.

A 2017 report by the Consumer Financial Protection Bureau found that the number of Americans over 60 with student loan debt (most often taken out for kids or grandkids) has quadrupled over the past decade. The average of amount of debt they owe is $23,500. A side hustle could let you retire debt-free.

While generating extra income may be your primary goal for starting a side hustle, the emotional benefits can be just as valuable. Kristof says that the connections you make by doing a side hustle can be especially important in retirement.

“Just keeping active and engaged does amazing things for your health and longevity,” she says. “It’s compellingly good for you economically, but it’s also good for you socially if you find the right side hustle.”

While extra income may be your primary goal for starting a side hustle, the emotional benefits can be just as valuable.

Lizbeth Meredith, a probation supervisor and now author and public speaker, launched a side hustle in her early 50s because she wanted to continue feeling relevant in retirement. “I’ve long noticed that my cohorts retire and either die or flounder if they didn’t make a transitional plan,” she says.

After publishing a memoir at age 51, she learned that she had a knack for public speaking. Still working at her 9-to-5 job, come the weekend she writes and does presentations around the country about her experiences as a domestic violence survivor.

“I am earning some extra cash, using a different part of my brain, and making a whole new friendship base,” says Meredith.

How to find your ideal gig

The ideal side hustle is something you do for fun first and financial reward second, Kristof says. Think about how much money you can earn and what interests you—and how far outside your comfort zone you’re willing to step.

Driving for Uber, for example, could bring up to $3,000 a month in extra cash, according to a 2018 survey of nearly 1,000 workers with side jobs by CreditLoan (the median: $350 a month). But you may not feel at ease picking up strangers.

Tutoring, on the other hand, could generate the same monthly income in a setting you might be more comfortable with.

Selling or renting property topped CreditLoan’s list as the most lucrative side hustle, but real estate investment can be high risk, especially close to retirement. And think about how much time you can commit.

“Go by what you like to do and then you’ll find one that will allow you to do it in the time that you have,” Kristof says.

For help finding legitimate side hustle opportunities, head to SideHusl and Side Hustle Nation, where you can also learn about the technical side of starting a side gig, such as paying taxes and setting up a retirement account.

You may come to love the gig economy. In a recent T. Rowe Price study of gig workers, including full-time freelancers and side hustlers, baby boomers  beat out millennials and Gen Xers when it came to job satisfaction: 84% reported feeling positive about being members of the gig economy.